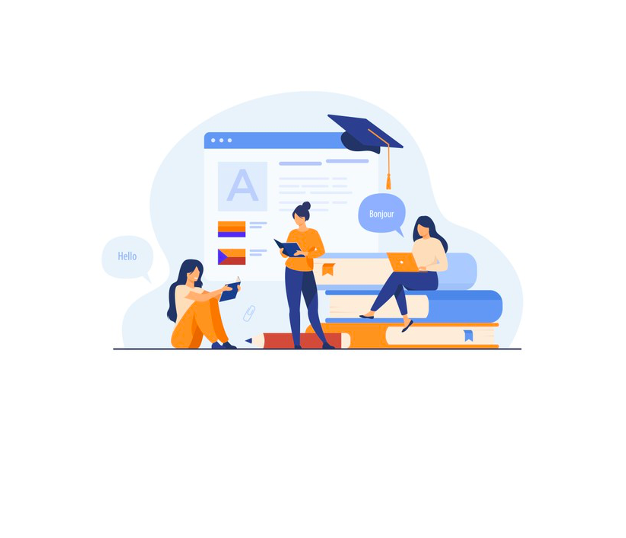 After finishing her BA in English with Film at King’s, Lea decided to stay for another year to pursue a Master‘s in Shakespeare Studies and the Principal‘s Global Leadership Award. She loves the Victorian age, black coffee, and hot sauce; and her goal is to establish a programme that establishes access to higher education for working class kids.

[Featured Image: An illustration of three girls at school. Source.]

Despite being known for their more open-minded disposition and awareness of larger issues like global warming, the influence of the patriarchal system on Gen-Z teens is undeniable. This system is evidently more pronounced in small-town communities such as Fröndenberg, wherefore its toxic influence has already managed to make itself at home in the next generation and manifests, for instance, in student leaders who oppose gender neutral or generally inclusive language in official school documents and even anti-racism manifestos. The only way to eradicate patriarchal thought and structures is to stop them from spreading onto the group of future leaders and decision-makers, some of which oppose the inherited social structures by speaking up about racism, homosexuality, and attending the Fridays for Future protests. Unfortunately, the number of students participating in those actions is rather small, yet it proves that they are willing to fight for a good cause and that at least some of them are open to change. It is clear that parts of the next generation actively demand change and attempt to create a better future for everyone, yet it is puzzling that there has never been a call for a Feminist Friday or a similar intervention, even though the effects of gender-based inequality affect a larger percentage of the students every day. One of the reasons for this inactivity might be the lack of awareness surrounding women’s struggle, suggests Laura. Sophie came to a similar conclusion, wherefore she decided to take action and make students aware of feminist issues and gender-based injustices. She co-founded the initiative NeitherBLUEnorPINK*, which educates students on gender equality and empowers not only young women, but children from all marginalised groups to stand up for themselves and demand to be seen, heard, and respected. In 2019 she returned to her former school for a week and she teamed up with Anja to educate young women on feminist issues. Together with the girls, they wanted to break the vicious patriarchal small town cycle the teenagers are inevitably caught up in. However, the two soon realised that they had much more educational work to do than expected. When asked which female leaders they look up to and feel empowered by, the students responded with a heavy silence reeking of their male-dominated everyday environment. The previously critiqued lack of females in higher hierarchical positions or “untraditional” jobs has evidently influenced the next generation’s perception of their opportunities. After broadening the question onto general female idols, the girls named countless influencers and YouTubers with little to no political engagement. One of the few positive examples named was the German social media mogul Pamela Reif who promotes sustainability and health-focused nutrition on her channels. She was recently named on the Forbes 30 under 30 list which recognises young entrepreneurial leaders. Thanks to the influence of social media, even the rather remote living small-town teens, have access to networks of positive female role models, given that they don’t drown in the stimulating sea of makeup, gaming, and fitspo content. Unfortunately, not one of the girls named the presumably most iconic contemporary female leader of their country, Angela Merkel. Despite the increasing visibility of successful and empowered women overall, Laura criticises the way women are often marginalised in an educational setting. She remembers that not even her sex-ed class introduced the different concepts of male and female pleasure or explained how different and yet equally beautiful bodies are. Instead of exclusively celebrating the discoveries and accomplishments of male scientists, politicians, and public figures, she demands a form of education that introduces students to a diverse spectrum of voices. Only by familiarising themselves with perspectives that differ from their own experiences can the awareness for issues suppressed by their patriarchal environment emerge. This awareness can then be fostered into a feminist call for equality from within the community that is a prerequisite to effecting systematic change. Unsurprisingly, the inclusion of female perspectives in textbooks to promote the prominence and importance of women in all areas of life is an important first step that has yet to be realised. Sophie argues that feminism must not be a possibly omissible topic that can be discussed in a single lesson, but that feminist modes of thought have to feature constantly to effect change within the students’ mindset.

Increasing the student’s encounter with feminist ideas on a textual level is great, but is unlikely to be effective on its own, argues Anja. She consciously refuses to participate in any behavioural practices perpetuating the patriarchy, for instance having male students carry her bag when they offer her assistance. She explains that this apparently nice gesture is actually motivated by subconscious chauvinist patterns which have taught the boys that it is their job to carry a woman’s bag and open the door for her “because they are a man”. Simultaneously, this line of reasoning implies female inferiority and attributes weakness to women who are obviously able to open doors and carry heavy items by themselves. In the beginning, her behaviour caused confusion and frustration, for her male students failed to understand why their teacher refused their help. Anja says that oftentimes her dismissal is seen as a personal offence. Yet it is exactly this reaction that encourages her to reinforce her demonstration of female ability and independence even further. Slowly her students begin to accept her decisions and only assist her upon being prompted to do so. She reckons that teaching feminist content is only a small contribution to the process of “depatrializing” the small-town community that cannot be fruitful if the engagement with it stops at the classroom’s doorstep. The un-learning of small everyday practices, gestures, and subconscious actions that perpetuate patriarchy and hinder feminist development within the next generation is pivotal, wherefore more strong feminist role models and mentors such as teachers are needed. Only then a more liberal and equal society can emerge from the ancient rural constraints. What exactly this new community might or might not entail and what Anja, Laura, and Sophie imagine it to be like is going to be the central topic of the final article that also explores the individual responses to the developing feminist culture.